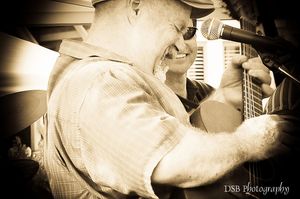 At practically every live show, somebody asks us about our equipment and choice of instruments. Unfortunately, when we’re on a break or it’s the end of the night, we don’t always have time to go into detail about how we achieve our unique sound.

But right now, we don’t have to go fast, so we’re finally going to give you a rundown on the gear we use. For this month's post we will focus on Herbie's guitar rig. And also be sure to check out our video to hear what Herbie has to say on the subject! After all, when it comes to info about the band, he’s not always full of it!

So first off, we use a combination of vintage and a modern equipment. We’re not sponsored by any particular brand name, but over the years we’ve definitely found some favorites.

Martin guitars rule. Before we started the Dangermen, Herbie had always played electric guitars. But since we’re an acoustic blues band, he needed an acoustic guitar that could stand up to the rigors of frequent gigs and travel and still produce a solid tone night after night. The Martin has 25-1/2” scale, as opposed to a Gibson, which has a 24-3/4”. The Martin is closer to the Fender Telecaster that Herbie grew up playing.

D'Addario strings are awesome. Lots of guitar players only change their strings when one breaks. Others change them to keep the sound “alive” whenever they notice a tonal quality difference after several months of playing. But for Herbie, one three-hour set is all it takes for the natural acidity in his hands to corrode and discolor the strings, resulting in a diminished or “dead-sounding” tone. That’s why he changes strings before EVERY performance. He buys EJ16 strings by the case because of their consistency and price. 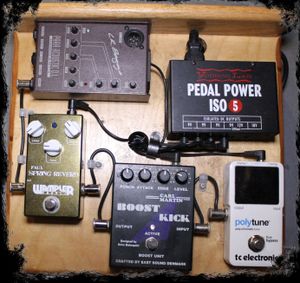 The TC Electronic Poly Tuner keeps the music coming. Outdoor venues and stages with lots of lights can result in lots of guitar re-tuning between songs. This tuner, which gives you a reading of every string at once, cuts down tuning time between songs.

The LR Baggs Para DI Acoustic Guitar Preamp offers terrific control. The pick-up used in an acoustic guitar differs from that in an electric one. The signal from the guitar to the amp and sound board has to be leveled out, and match the respective inputs.  This box can shape the sound with the 5-band EQ, which affords Herbie local control of the tone from his guitar, and it controls the gain of the amplifier to prevent feedback.

The Carl Martin Boost Kick  -- you guessed it – kicks it up! Guitar players typically need (or at least like) to be louder in the mix, especially during solos. This pedal gives Herbie that extra boost that punches up his guitar’s sound.

The Wampler Faux Spring Reverb is a classic.  In large rooms and open spaces where the sound is repeatedly reflected, you get natural reverb. This pedal uses metal springs/spring reverb (a technique first developed in 1939) to create the similar effect of being in a larger space. We love how it “thickens” the acoustic guitar sound, fills a little sonic space in our music, and adds depth to all our instruments.

Still have questions? Head to our comments section and ask away! We love hearing from you!